Stonehaven is a small historic town roughly 15 miles south of Aberdeen. Two rivers; the Carron water and the Cowie water flow through center of the town before reaching the sea. Over the past few years, high levels of rainfall coupled with silt accumulation in the river beds have led to several episodes of flooding in the town. Raeburn Drilling and Geotechnical (northern) Ltd were contracted to perform a large scale preliminary site investigation in the town, providing baseline data for the design of new flood defenses

The scope of works for the project included:

The main body intrusive works were completed over a two month period towards the end of 2015, however monitoring work continued well into 2016.

A principle difficulty with this project was limited working space. Stonehaven is a historical town, and as such many of the roads, paths and gardens are not easily accessible by vehicle. A variety of drilling rigs were used, in conjunction with hand window sampling and hand excavation, to allow works to continue regardless of space constraints. 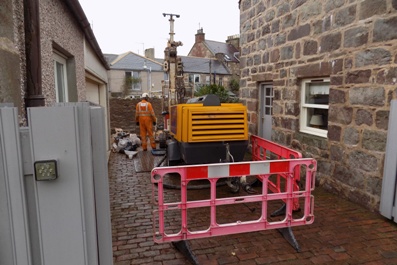 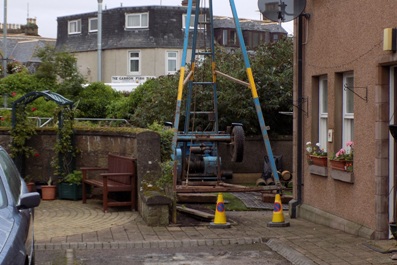 One of the primary investigations was related to foundation depth and design of the properties bordering the river. This section of the project involved excavations in the gardens and yards of many members of the public. Every attempt was made throughout the works to minimize disruption, and maintain a good relationship with local residents. Working hours were tailored to minimize disturbance, excavation methods were designed to keep noise and vibration down, and all pits were carefully re-instated to the satisfaction of the landowners.

Several road closures were required while boreholes in the road were drilled and installed. To speed up drilling and keep the closures as short as possible a specialized sonic drilling rig was used. Sonic drilling significantly reduces lost time due to obstructions, and produces high quality soil and rock samples for analysis. Raeburn Goes Sonic

Once intrusive works were completed, a significant period of regular sampling and monitoring was undertaken on borehole and surface water installations. Several of the installations were fitted with electronic auto logging hardware for constant measurements of water level. This allows changes in water level to be compared with rainfall, and the set up of data baselines for normal fluctuation. Several of these loggers were installed in the river itself, using borehole installation pipe anchored to footbridges.

During the monitoring period in late 2015 storm Frank hit the UK further demonstrating the need for new flood prevention schemes in the Aberdeen area. Stonehaven suffered significant flooding, although not as catastrophic as some towns on the Dee and Don. Several of the bridge anchored data loggers were unsurprisingly lost during the storm as they could not be safely reached to remove them, and were swept away by the river. All the other monitoring equipment survived the winter however and the final rounds of sampling were completed in mid 2016. 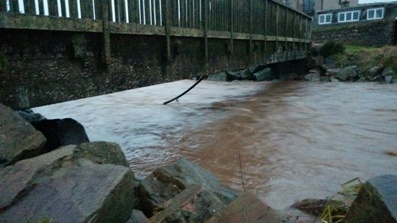 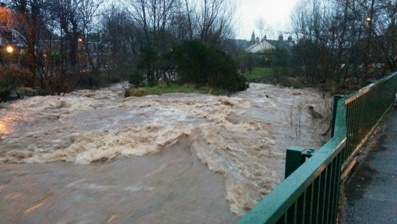